I'm a beer drinker, I haven't had a tremendous amount of whiskey. All I'm really qualified to tell you is what I like (and, the truth is, that applies to movies and beer, too). So, having established that qualifier, I'll tell you this. I absolutely love Templeton's Small Batch Rye Whiskey.

This stuff pours a very light brown, far lighter than the bourbons and whiskeys I've enjoyed lately. It smells sweet. It hits the nose with a lot of vanilla, butterscotch, raisins. And the flavor is just about the smoothest, best balanced booze I've had in a while, maybe ever. That sweetness in the aroma is strong and dominates the flavor, but it doesn't cover up a lot of strong spice and (of course) rye. I had this over a few ice cubes the first time around, and liked it so much I had the second tumbler neat. My only concern is that something this tasty is going to require a little forthright moderation on my part.

If you believe the label, this was Al Capone's whiskey of choice. Capone might have been a thug and a crook, but apparently he knew a thing or two about what to pour. Templeton Rye whiskey is delicious; really, just top to bottom outstanding. I might have a new favorite way to unwind before bed. 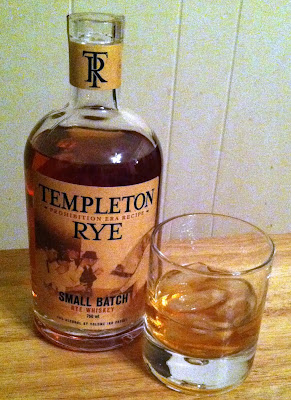