According to RateBeer.com, what separates an imperial porter from a stout is that the imperial porter doesn't have the overt roastiness of the stout. I'd think that makes Evil Twin's Lil' B Imperial Porter a porter in name only, because I picked up on smokey, rich, roasted malt in spades, here. This thing pours with no head at all, only a faint, mahogany-colored sudsy lace that fades to nothing at all after a few seconds. There was no lace in the glass as I drank it. The aroma is warm, with cherries and malt, and that describes the flavor, too. Boozy heat in the exhale, which is no surprise at 11.5% ABV. This reminded me of my favorite stout, Avery's Mephistopheles, but it isn't nearly as complex. That malt cherry flavor I picked up on in the front was nice, but nothing like the other flavors in Mephistopheles (raisins, baker's chocolate, vanilla, rum, etc) show up. Not bad, but I won't have it again at this price. 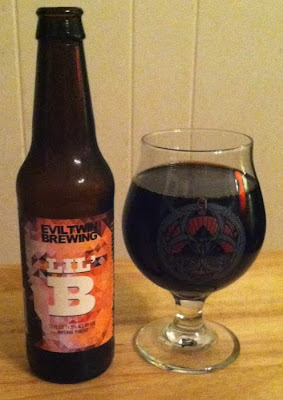