Stone's 17th Anniversary IPA is called Götterdämmerung, and as the name implies, it's a real Teu-Tonic. (Ha! You see what I did there? I kill me!) I don't like this as much as the lemon-toned 16th Anniversary IPA, it's not as all-out drinkable... not quite as much of a summertime thirst quencher. But 17 is a unique, complex beer, and I enjoyed it. The typical Stone hop overload is right there, but this thing is really all about the pilsner malts, and there is a lot going on there. Kay said she thought the flavor was oaty and rich, and I picked up on that big-time right up front. In the finish there was a slightly sweet, bready caramel thing going on, too. I hate beer reviews that just throw descriptive words out there, I think that's pretentious as hell. But some of the words I jotted down trying to describe this beer were cereal, grapefruit, pretzels and hay. Yeah, it's complex. I didn't love it, but I liked it a lot, and I'll probably get another bottle before they're all gone. 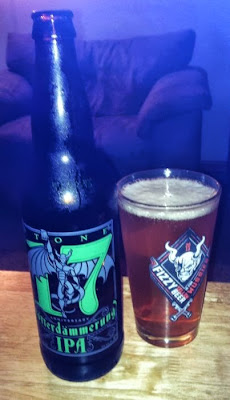