This is the last weekend of my two weeks of vacation. I go back to work Monday. The vacationing ends tonight, though, for all practical purposes. My son goes back to his mother today for a few weeks, and then back here full time at the end of August. He will be living here this school year, and attending school locally. This will be the first time he's been with me full-time since he was three years old. He's taller than me now. I'm excited and nervous as hell.

My stepson from my second marriage goes back to his mother on Sunday, and I don't suppose I'll see him again for another year. He's always here for a couple of weeks in the summer, but other than that he's in New York with his mom. I started dating this boy's mother when he was a year old. His mother and I lived together (including the time we spent married) for almost ten years, and I think of this boy simply as a younger son. I wish I could see him more often than I do.

My stepson is ... well, I'll say unique. Something about him is a little different from other kids. He struggles with some things that come easily to other children his age. There are other things that he has done well since before an age when they come easily to most kids. He's been tested and checked by various doctors over the years, and all they ever did was disagree with each other and try to offer vague reassurances. I always expected to hear the word "Asperger's," but none of them ever felt sure that that was exactly it. No one ever said exactly what was going on, only that he was a little different and he would need some extra help.

He's a great kid. He loves to laugh and he's smart as a tack. He does have a strange perspective, though, and says a lot of odd things out of the blue. Some of the weird bits he's dropped on us from out of nowhere over the past two weeks include:


I like my life now. My job is suitable, my house is fine. I have an amazing girlfriend and a couple of dogs, I get along well with my extended family, and I can afford good beer and Netflix. But I do miss being able to hang out with my stepson most evenings, listening to him rattle off his strange conclusions, and laughing like hell together. I'm already looking forward to next year's visit. 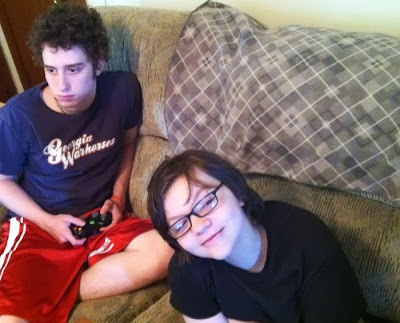