The beer looked and smelled like regular ol' Sierra Nevada Pale Ale. Of course, that's not a complaint. I thought it tasted very much like SNPA, too, but it might have been a little crisper and a little hoppier. Of course, it might have simply been that I never order Sierra Nevada on tap, and that I was only noticing that the beer was a little fresher and better than it is from the bottle. By the end of the glass I wasn't sure if I was simply tasting a rebranded SNPA or a slightly different variation on the recipe, but either way, I had no complaints. This beer was a slightly spicy, hoppy pale ale with a mellow malt. It was delicious, which is par for the course from Sierra Nevada. Had I thought this was something they were actually brewing right at the theater, I'd have been blown away.

In terms of the theater itself, I have nothing but good things to say about Alamo Drafthouse. They're serious about their no talking/no cellphones policy, and the violations I noticed were brief and fairly inconsequential. The food was pretty good. Not amazing, but pretty good. I had a spicy bleu cheese burger and fries and I enjoyed the meal. My second beer was a draft Arrogant Bastard, and it was delicious as always. We saw We're The Millers, a middle-of-the-road raunch comedy that was improved by having waitresses bring me beer. 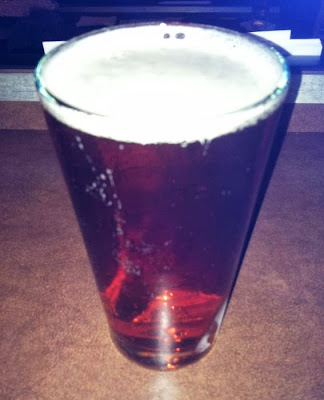