I like Blue Point's No Apologies Imperial IPA. It's like a heavily hopped, IPA version of an American strong ale. It pours a hazy, deep peach color with a frothy head, and average carbonation. Rich, malty aroma. The flavor is a woody, sweet caramel that's not overshadowed by the big, tart hop character. This one leans to the malt side in a big way, and it was a nice change after several nights of extra bitter, hop-dominated beers. 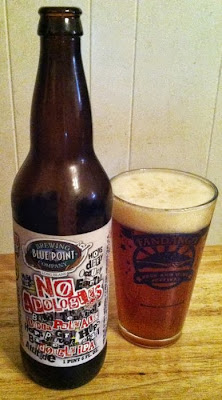