Rogue's red IPA, Captain Sig's Northwestern Ale, is pretty darn good. It's a redish (duh) rust color with a lot of head and just a ton of lace. There is a lot of malt in the aroma and taste. It's billed as an IPA, but it reminds me of something like a slightly dialed back and then rehopped Arrogant Bastard. I picked up on caramel and grainy malt, and just a bit of candied fruit in the finish. It has that mildly boozy burn that makes Arrogant Bastard so good, and that's a good thing. I'll buy this again. 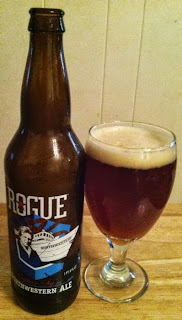 PS - This ale is named in honor of Captain Sig Hansen and the crew of the Northwestern from The Deadliest Catch, and some of the proceeds from the sale of this beer support the Fishermen's Fund.
at 12:30 AM