New Belgium's Lips Of Faith La Folie Sour Brown Ale is really something. I had the 2012 brew, and this was my first sour ale. Wow. First off, I'll say that when they say sour, they don't mean "kinda sour" or "hints at sourness." I did not find myself struggling to "pick up on the sourness" from this beer. I found myself struggling instead to pick my face up off the floor. This is a freight-train to the mouth kind of sour.

This beer pours murky brown with very little head or lace, and the aroma is a mild malt that's just dominated by something like sour cherry. The flavor is aggressive. I guess that's one word for it. Honestly, all I could taste was the sourness. It's more of a sour apple in terms of flavor, and not the sour cherry I thought I smelled in the aroma. There is a little spice, a little background richness, but this stuff starts sour, finishes sour, and leaves a sour aftertaste. This beer is not trying to cozy up and be your friend. You'll like it on its terms or you won't like it at all. I cannot say I really enjoyed this beer, but I can't remember the last time something bowled me over like this did. I will eventually try this style again, but not soon. I'm overwhelmed.

(Note: More than three years later, in the fall of 2016, I finally got around to that second review. That review, from an entirely different perspective, is at this link.) 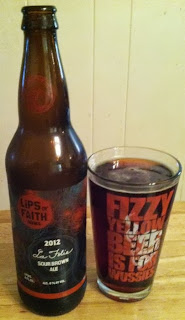