I was unsure about the age but took a chance on a bottle of Sierra Nevada's 2012 Southern Hemisphere Harvest IPA. It turned out to be pretty tasty, although more about malt than hops, and warmer and boozier than I'd expected. The body was a bright but hazy brown with a thick head that left a lot of lace. The aroma wasn't strong, but there was a rich malt with some apple and citrus tones. The flavor was better cold than it was as the bottle warmed. The first glass had strong caramel notes and the citrus hops were clearer, but as this thing warmed the flavor muted to something mild and slightly Scotch-like, while the hop character became more floral but more subdued. 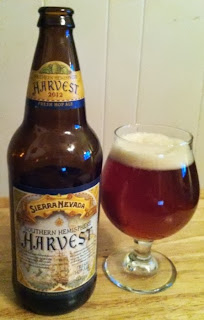