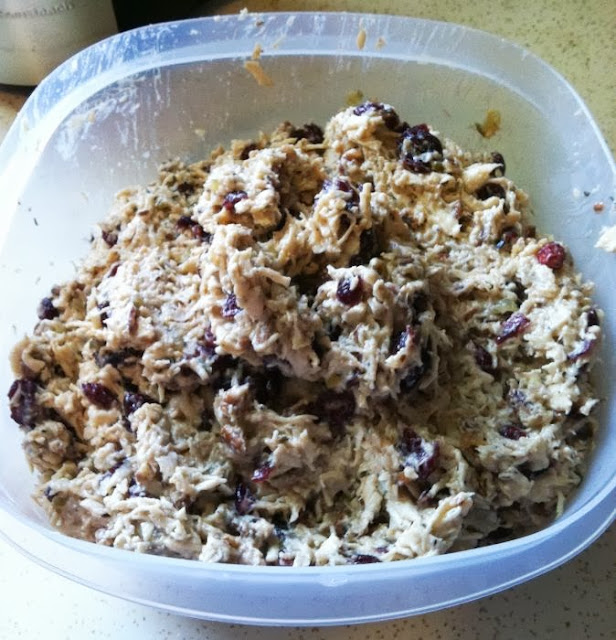 I'm pretty proud of the fact that almost everyone who tries it says "Damn ... you made this?"


It ain't hard to make, either. It's almost dummy-proof, which is why I get it right. Here's how to make it:

Season six chicken breast fillets. I season them with rosemary, rubbed sage, thyme and garlic. Grill them up until they're nice and juicy inside and a little bit crispy outside. I just toss them on the Foreman. Then, shred them by your process of choice. You can shred them by hand if you have a week, but I use the shred setting on my food processor. I shred them three at a time, it's easier to mix that way. Combine the three shredded chicken breasts in a big mixing bowl with half of an eight ounce bag of finely chopped pecans, half of a 22 ounce container of your dressing of choice (I like light Miracle Whip, or light Hellmanns sometimes if I don't want it quite as sweet.) And add about a tablespoon and a half of sweet pickle relish.

And then, the ringer ingredient: Cranberries. Fresh is best if you can get them and don't mind spending the money. Frozen will work if you can get a bag. Just thaw them all day before you make the salad. Dried cranberries work, too, and in fact that's what I end up using most frequently because that's what is easiest to find. Anyway, add as many as you like. I freaking LOVE me some cranberries, so I toss in a cup of 'em. Sometimes more. Mix all the ingredients, spoon into a big-ass tupperware container, then shred the other three chicken breasts and add the other half of the dressing and the other half of the bag of pecans and the relish and another cup of cranberries, mix it all up and fill up the container with the rest.

It's not bad right away but after it has been in the fridge for a couple of hours this stuff becomes stellar. Make a sandwich with some hearty whole-grain bread or serve it on a bed or lettuce or on crackers or just eat it by the handful. I'm telling you, it's awesome. It's fresh, it's simple, it really tastes good, and it's healthy because it ain't got heroin or cocaine in it.