Mud is not the worst movie I've seen in 2013, but it's easily the most overhyped.

With a 99% tomato meter (as of this writing) and all kinds of lavish praise from it's showing at Cannes, Mud seemed like a safe bet for an afternoon's entertainment. Besides the positive notices, the film seemed to have a lot going for it, including an ensemble of good to very good actors, including Sam Sheppard, Michael Shannon, Reese Witherspoon, and Deadwood's Ray McKinnon. But it turns out to be a whole lot of potential that amounts to nothing, and it takes far too long to get nowhere. 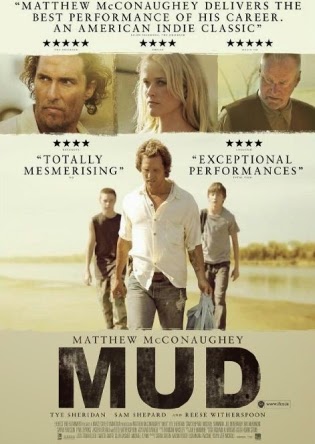 First, the good stuff: Matthew McConaughey stars as the title character, an enigmatic southern drifter with weird, otherworldly charm, and this is the kind of role that McConaughey is well suited for. He isn't so much an actor as a screen presence, and he's at his best in roles that require him to do little more than seem curious and vaguely dangerous. His character here packs curiosity and vague danger in spades, and McConaughey pulls it off effortlessly.

The other performances from the actors listed above are good, too. And as the primary child character in what amounts to a poorly done coming of age story, Tye Sheradan is outstanding. This kid can act, and probably has a future ahead of him. His name is worth remembering.

Where the movie falls short is in everything else, and it falls short in spades. Jeff Nichols directs aimlessly. The film takes forever to tell very little story at all. The plot seems like one long first act, with promised revelations that are never realized and character arcs that never arc. Besides that, there is a strong misogyny to this film. And "misogyny" isn't a word I use easily, given that I'm a guy who generally fears and mistrusts women. Thing is, I'm used to seeing movies that remind me that my fear and mistrust is illogical and dysfunctional. When I see a movie that seems to fear and mistrust women even more than I do, it makes me uneasy. There are three principle female characters in Mud. All three of them are self-centered, dishonest, and flaky as hell. That seems a bit heavy-handed.

And in the end, Mud never satisfies in any way. It never ties together all the lose ends, but it sloppily ties together too many of them to leave interesting, unanswered questions. It puts principle characters in dangerous, life-changing situations... and then lets those situations mostly pass the characters by, leaving them no more effected than they might be by weird weather or interesting, international news stories. And it gives us far too much McConaughey. For a character that's supposed to be enigmatic and mysterious, within the first hour he becomes far too godamn tedious and predictable. A little Mud goes a long way.

I can't really recommend this film, but if you end up seeing it, you'll see a good performance by Tye Sheradin and several very pretty location shots of Arkansas river property. If you want to see a coming of age film with some southern flavor, a real air of danger, and some memorably creepy characters, check out Undertow, instead. Don't bother with Mud.