Here are some notes on a flight I enjoyed at Blue 5 in Roanoke. Well, I really enjoyed one of these beers. The others couldn't measure up to the one. It might have been a mistake to do an all-IPA set-up.

The first beer in the flight was Stone's Enjoy By 5-17-13 IPA (far left in the picture below), and it was delicious. My longer review of that beer in specific is here.

Up next was a Founders Nitro IPA that just couldn't measure up to that Stone brew. The only thing I enjoyed about this beer was visual. It left the most lace I've ever seen on my glass. As I drank it, it absolutely painted the inside of the glass with a thick layer of white. I thought that was neat. But the flavor was weak and watery, which I'm not used to with Founders beers. It is rare that they disappoint me.

Next, Lost Coast Indica IPA, which was my second Lost Coast beer in just a few days, and my second major case of meh from Lost Coast. It was as crisp and as refreshing as a glass of cold water, which says more about how cold Blue 5 keeps their beer than anything else, I suppose. It was at about this point that all I was thinking about was getting a full pint of that Stone Enjoy By.

The last beer on the flight, a double IPA by Ballast Point, was just an obstacle to me at that point. I just sucked it down in a hurry so I could get back to the Stone beverage. Because of that I don't think I should really even review the Balast Point or the Lost Coast beers, and I have not reviewed them at RateBeer. It just wouldn't be fair. If I'd had them first and saved the Stone for last, maybe I could be objective about them, but I didn't.

Next time, I'm going back to a better balanced flight. An IPA, a stout, maybe a lager and a strong ale, etc. Trying to discern the finer qualities of four different IPAs back to back is too delicate a process for my neanderthal palate. Especially when the first one up is something amazing from Stone. 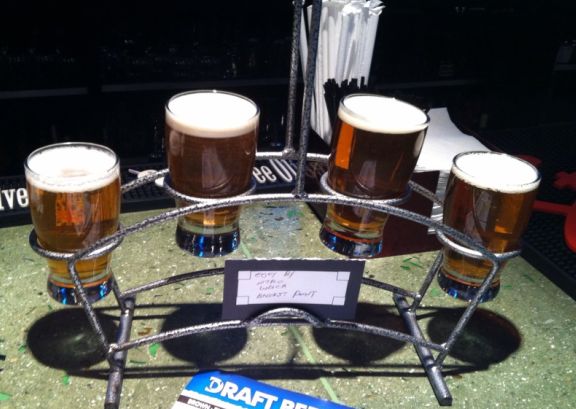