Before I review Star Trek Into Darkness, I should say up front that I am not a Trekkie. I should admit that I generally find everything to do with Star Trek annoying, I find Trekkies annoying (or Trekkers, or whatever the hell they call themselves), and I never gave a shit about Star Trek until the first JJ Abrams film in the series. I went to see that film reluctantly, and no one was more surprised than I was when I loved that film. 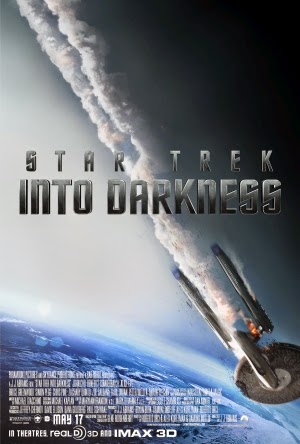 In fact, there is a lot of stuff in Star Trek Into Darkness that is aimed at just guys. Kirk and Spock have a love/hate best-adversarial-friends relationship (this is basically a buddy movie). Kirk sleeps with foxy alien chicks. There's 'splosions and gun fights. British sexpot Alice Eve joins the cast as a science officer, and gives us one completely gratuitous and pointless and wonderful glimpse of herself in her underwear.

So, between big laughs and chase sequences and the Kirk/Spock "buddy movie" element and Alice Eve's big ol' boobies, Star Trek Into Darkness seems more aimed at me than aimed at the average Trekian. It's an action film, but not a dumb one. There is a villain who is somewhat sympathetic (forcing you to consider morality and politics and etc, etc) and there is a scene or two where manly tears might be shed. I don't know if a Trekanatrix would embrace that or be disgusted by it. But anyone capable of enjoying a fun movie just for being fun ought to get a kick out of this film.