This is an attempts to make up for an initial, less than glowing G+ review of Roanoke Railhouse IPA. I still don't love it, but this is a better IPA than I initially thought. It's a bright, clear amber with an average head that leaves a lot of lace. Grassy hops in the aroma, and the flavor is citrus, floral/grassy hops, and a little bit of a butterscotch kind of malt. This IPA isn't on par with my favorites. It isn't gonna knock Stone's offerings, or the best stuff from Lagunitas, Avery and Hoppin' Frog, off of my personal top shelf. But it is a good IPA and deserved a better review than my first one. Another issue is that since I reviewed this the first time I've become a big fan of the style in general, so YMMV. 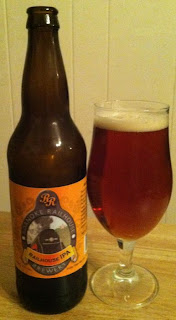