Some notes on a flight of beer we sampled tonight at Blue 5:

To the left is some sort of apple/raspberry hard cider that we tried mostly out of curiosity because neither of us had ever bothered to try hard cider before. It tasted like candy. We didn't even finish it, and I didn't bother making note of the name or the maker.

Second from left is Abita's Purple Haze, which was lame. That's the right word: lame. It had a slightly sweet smell, but there was hardly any flavor at all. Watery. Too crisp. A bit of an artificial, jello-like sweetness was kinda floating around on the roof of the mouth, but mostly it was boring. Kay said something like "OK, fine, whatever."

Then came Dogfish Head's ApriHop, which is an apricot flavored beer. It has sort of a creamy sweet aroma , and the flavor was clean with a slightly tart, mildly alcohol-forward finish. I thought this was boring. Kay was as bored with it as I was.

Lastly, Clown Shoe's Brown Angel, which I thought smelled kind of malty and sweet, and which I thought had a pretty good, rich flavor. Based on one sip. But I never got another sip because Kay never gave it back to me. I'll have to order this again so I can add it to my official ratebeer.com reviews at another time. Kay loved this beer, she said it was warm and kind of vanilla flavored, and after her first sip the little glass never came back to my side of the table. The big, big upside of this is that brown ale isn't a style I gravitate to, but if this Clown Shoes brew is any indication  it's one Kay enjoys. So it gives us a style to explore together. 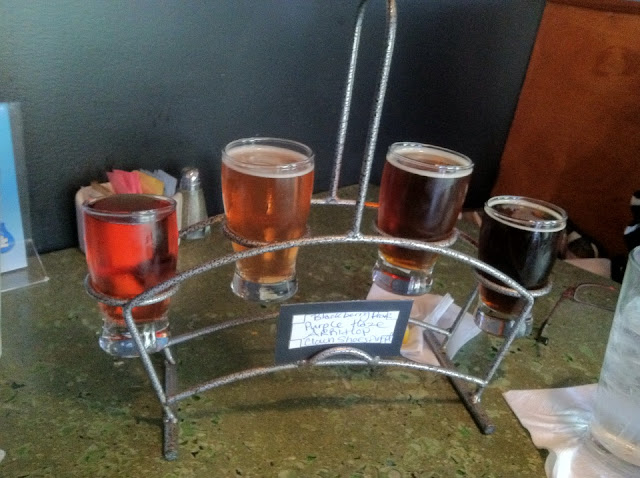