Last night we saw, and enjoyed, 42, the biopic about Jackie Robinson. Robinson, of course, was the legendary first black player in major league baseball, and a man who changed the world by simply doing what came naturally. 42 presents Robinson as a man of tremendous strength and patience. It's possible that Robinson's personal merit is overstated for the film, but this is one of those instances where the legend really is more important than the man. Jackie Robinson changed the world by simply providing it an opportunity to change. He was the right man at the right time, and his career represents one of very few instances where the world became a better place because a man simply played a game, and played it well. 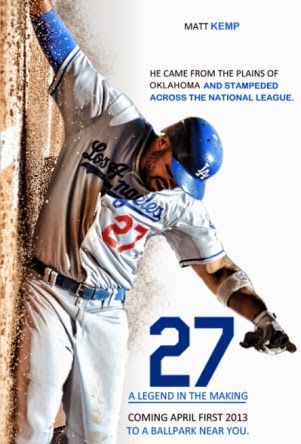 42 is a formula movie in many ways, but that in and of itself doesn't make this a bad film. It's a baseball movie, and like most baseball films, it follows a team as they actually become a team and not just a collection of individuals over the course of a season. It's a 1940's period piece, with the usual grand photography and music that makes the age seem somehow majestic and otherworldly. And it's a movie about a savior figure, a man who suffered for the sins of others. That's a fair amount of balls to keep in the air at once, and it's a credit to director Brian Helgeland that he pulled it off. It's a credit to the writers and actors, too. The script is somewhat predictable, but not at all cliched. Racism is presented for what it is, combined ignorance and fear. Those are things that can be corrected. 42 shows us people who are, in many instances, racist simply because they'd not had a chance to learn.

Chadwick Boseman plays Robinson well, as a charismatic and engaging young athlete who's patience is sometimes tested by the behavior of those around him. During the movie I was struck by how much Boseman looked like a young Keith David. In the movie's closing credits, when pictures of the real Jackie Robinson were on the screen, I realized that he also looks quite a bit like the man he was portraying. Harrison Ford was also good as Branch Rickey, the team owner who was determined to end segregation in major league baseball. Other performances were strong as well, especially Lucas Black as hall of famer Pee Wee Reese and Alan Tudyk as a bigoted Phillies manager who provides some hateful villainy at a time when the movie needs it.

There's nothing wrong with following a formula if you do it well. It's like baking a cake according to a strict recipe. If the ingredients are high quality and the cook is careful, you can end up with a cake that's not surprising or original, but is still delicious. 42 is well worth seeing. And take your kids, too. There is a lot here to talk about afterwards.

(A note about the trailer. This movie trailer features anachronistic rap music, and I'd been afraid that it would be featured in the movie, too. It isn't. And I was glad. I can put up with certain kinds of stylistic departure, but when a movie features music that is jarringly and gratingly out of place, it just ruins it for me. The rap music here is apparently intended to get modern young people interested in the movie. Thankfully, the movie itself features a very traditional score full of orchestral music that swells to highlight emotional scenes and is otherwise non period specific.)