Kay and I shared a flight at Blue 5 after dinner the other night. Left to right in the photo below:

Schneider Aventinus wheat bock. I've reviewed this before. I like it a lot. It's as fruity as a hefeweizen (IMHO) but has a big malt and a strong backbone, like a good American strong ale. Kay didn't enjoy it as much as the heffies she's enjoyed lately, mostly because it's so malt-forward. What I like about it is what she disliked.

Ommegang Gnomegang Belgian Strong Ale. I thought it tasted like a tripel. By the third sip I was loving it. It really fills the mouth, and it’s warm and strong. The carbonation is right up front, but it’s malty and rich and just delicious.Savory, even. Not a lot in the aroma to set it apart from other tripels, but the flavor is so enjoyable. Kay thought it was a little too hot.

Delirium Tremens Belgian strong ale by Brouwerij Huyghe. It was a little bright for my taste. There was a lemon/citrus thing in the close that I liked, and a lot of carbonation, but I always want something fuller than this from a Belgian. Not enough malt to suit me. Not enough everything. Kay liked it, she picked up on that citrus final note, but even while she liked it she didn't think she'd have another.

Blue Point's Sour Cherry Imperial Stout was just awful. I didn't like this at all. There was no mouthfeel at all. It was like water. There was no aroma, either, and the faint flavor was all up front. It was as mild and innocuous as Murphy's stout, but there was a faint, sour cherry presence that reminded me a little bit of those teddy-bear shaped cough drop lollipops that we used to get for my son when he was sick as a toddler. Kay said that the flavor was faint and forward and boring. 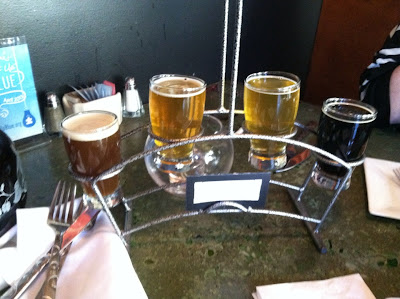