Uinta Anniversary barley wine is a barley wine that might just be aimed at IPA fans. It pours a rich caramel color with a slight head that leaves some lace. The aroma isn't overly strong. There's some malt and a little honey in the smell, but it isn't overpowering with sweetness, which is something I often dislike about barley wine. Where this thing really stands out is the flavor. Huge, forward, strong malt and only a slight background sweetness, and some bitter hops in the finish. It's crisp, not syrupy like some barley wine can be. This thing might disappoint some barley wine fans, but for someone like me who isn't in love with the style, this is very good. 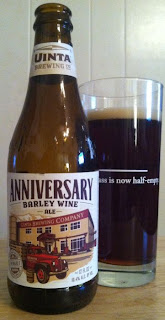