The other night at dinner I had The Congo, which Devil's Backbone bills as a Belgian style IPA. That's a lot of globe trotting to cram into one brew, and unfortunately it doesn't quite live up to all that, but it ain't bad. It's a very clear golden color with a lot of carbonation and about a finger of head, and the aroma is more hops than malt. The flavor is, too. This thing is heavy on the IPA and not so much on the Belgian. Having said that, it's not bad. The hop character is grassy and citrus and the mouthfeel is medium-sticky. I liked it enough to have another. 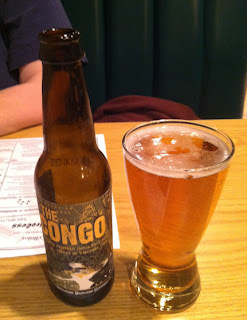