Lagunitas DayTime is billed as a "fractional IPA," and I think that's about right. It's aimed at people who want a beer but really aren't in the right time or place for a beer, and with that in mind, it doesn't amount to much of anything. It pours the same yellow gold as American adjunct lagers, maybe just a shade darker. There's no real head, no lace, and not much to distinguish the presentation. The smell is actually slightly bad. It reminds me of babyfood peas. The taste is a little bit better. It's like someone figured out a way to hop water. There is no real flavor other than the hops, and the twang at the finish of the sip is kinda beer-like, but I won't have this again. I'm not in the target demo, anyway. 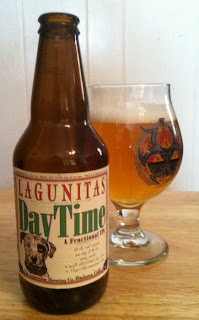