My appreciation of canned beer is an evolving thing. And, believe me, the fact that I even have an appreciation of canned beer is kind of a surprise. I avoided canned beer like the plague for years. My discrimination against cans goes back a long way. I've associated cans with cheap, shitty beer since ... well, since I was still drinking what I now regard as cheap, shitty bottled beer. Everyone needs something to look down his nose at, right? Said the 22 year old version of me, standing with a Michelob in his hand and making fun of his friend with a can of Bud.

Move forward twenty-some years and now I'm all about craft beer. I've actually become a bona fide beer geek. The history, variety, and art of beer is just about my favorite topic. My attitudes have changed a lot, and I even have a working relationship with cans these days. Oskar Blues turned me around on the can with Ten Fidy, a huge, thick, oily, loquacious, angry Russian stout. I love it, I buy it all the time, and the can is not a factor in my enjoyment. (Of course, any beer worth drinking is a beer worth pouring. I drink nothing right out of the can or out of the bottle. But I digress.) 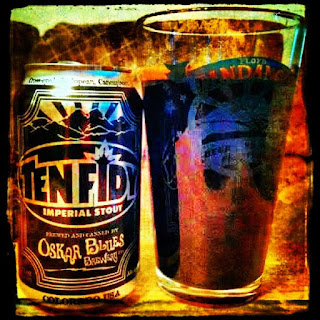 Other beers I've since enjoyed from the can have been similarly aggressive brews. Other stouts, big IPAs, strong Scotch ale, etc. But, whenever I have one I always marvel at how good it is, given that it was sold in a can. I will admit that that I have learned over the past year that cans, in and of themselves, are no reason to blanch at a brew. You can't judge a beer by it's container. And, hell, cans may have advantages... at least with regard to protection from light, and as far as storage and transportation, etc. I've even heard from reputable sources that there is no reason to believe that modern canning processes effect taste. Many people even make the assertion that there is no reason to believe that the can itself effects taste. That, for me, is the final hurdle.

I can't help it, man. I've harbored this attitude for twenty-plus years. Part of me believes that the reason the canned brews I've enjoyed lately have survived the can is because they're damn strong ales. Deep, black stouts and hopped up IPAs just kick aluminum's ass, right? And it takes a hop overload or a ridiculous amount of malt to withstand the taint of alloy. Right? I may never shut off the little voice that makes that assertion.

Now comes news that The Boston Beer Company is going to can Samuel Adams. The idea makes me wince a little bit. I cannot help but believe that a marginal-to-passable lager like Sam Adams isn't going to stand up to aluminum, regardless of what kind of process the Boston Brewery is using.

I'll try one, that's for sure. I've always thought that Sam Adams Boston Lager was a decent session beer. No, it isn't what I'd pour if I wanted something to sip slowly and enjoy as I unwind at the end of the day. However, (and I'll stand on Greg Koch's desk in my workboots and say this) Sam Adams is as good as anything else for washing down buffalo wings. I will always have a little place in my heart and in my belly for Boston Lager. So, I'll try it in cans. If it still tastes alright out of the can, maybe it will be enough to kill my can bias forever.

Probably not, but maybe.