In which I reveal myself, yet again, to be the asshole that I am.

So, this picture is bouncing around in my Facebook stream: 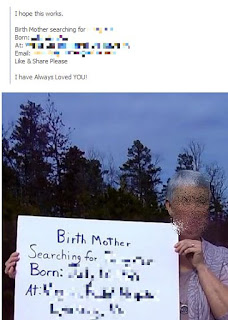 I've blurred the photo and the details because I'm not inclined to help this woman. I don't really wish this woman in particular any ill will, but every single time I see someone doing this ... some biological "parent" trying to track down the child they gave away years ago, I have the same reaction: What a selfish, shitty thing to do.

People share these kinds of photos because of a strong, understandable gut reaction. They are trying to help reunite a parent and a child. As a parent, I understand that. But, as an adoptive parent, I also understand that this woman is not a parent, not in any meaningful way, unless she's raised children other than the one she is searching for.

Don't give me any shit, either, about this woman having a right as a "biological parent." Being a biological parent, in and of itself, is not parenting at all. It's next to meaningless. Reproduction is a simple, basic biological function; no better and no more special than eating, coughing, or taking a big crap. Hell, even cockroaches reproduce. Big godamn deal. Reproduction is not magical, it doesn't give you some unimaginable bond or unbreakable lifelong attachment. Yes, I do believe that an unborn child is just that; a child... but once you give away your claim to that child's upbringing, that claim is gone forever.

And don't give me a load of crap about this woman needing closure. She has had years to find some kind of closure and learn to accept the decision she made years ago. Her inability to accept the finality of her decision is nobody's problem but her own, and she has no right to expect anyone else to allow upheaval in their lives on her behalf.

Don't even hand me theoretical bullshit about this woman having possibly been forced to give her child away. Hell, I'll grant you that premise, if you want. Let's say that is the case. Let's say this woman did, under some tragic circumstances, find herself forced to part with a baby years ago. If that did happen, then, yes, it is a tragedy. But how will her past pain be assuaged by causing upheaval in the life of someone who is now a stranger?

No one owes this woman a thing. Her guilt and her pain are her own, she has no right to impose misery on anyone. No one owes her the ceremonial acceptance of her "love." What "love" could she feel for a child she doesn't know? She's projecting a fantasy onto a real person with a real life, and if she really felt any meaningful love for that human being, she'd not want to disrupt his or her life.

Yeah, sure, I admit, I'm a hard-ass. But I am also an adoptive parent who has devoted my life to my child. MY child, the child I have raised, the child I have dedicated my life to, the child who means more to me than anyone else or anything else. If anyone with a merely chemical and otherwise meaningless connection to him ever showed up and attempted to claim parenthood, regardless of the purity of their intentions, I'd raise a kind of hell they'd never hope to see again.