From the name, I expected Samuel Smith India Ale to be an IPA. From the first sniff of the aroma I knew something was off, and the second I tasted it was wondering what the hell I was actually drinking. Turns out, this is a "Premium Bitter," but I'd guess it's not a very good one. It pours dark golden peach in color with a faint, soapy head. The aroma, to my way of thinking, was kinda like a hoppy Fat Tire. The flavor isn't what I expected at all. It starts out clean and gets malty on the finish, but slides just a little bitterness under the tongue. It isn't awful, but I won't have it again. I still regard Samuel Smith's Imperial Ale as one of my favorite beers ever, but this one just ain't in my zone. 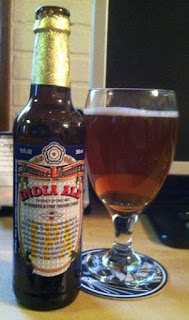