Bell's Smitten Golden Rye Ale doesn't hit the rye very hard. It's very hazy in the glass, with what looked like protein clumps, although my bottle was only about a month old. The head faded quickly and left no real lace. The rye in the aroma is very understated, mostly I picked up on some grapefruit hoppiness. Very little rye in the flavor as well. Pine, citrus hop notes made for a nice IPA like tingle, but nothing really special. I like Sierra Nevada's Ruthless Rye and Founder's Red Rye PA better, and I'll probably stick with those two for my rye fix. 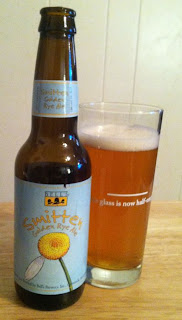