MOVIE REVIEW: NOT FADE AWAY

Today my son and I saw Not Fade Away, which I would describe as That Thing You Do by way of The Sopranos.  It was written, produced and directed by David Chase, the writer, director and producer behind The Sopranos. Chase spent the 60's trying as hard as he could to be a musician in a successful rock band, so, you do the math. 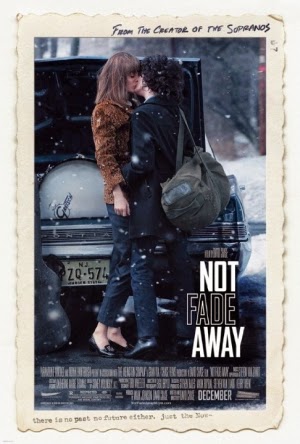 Like The Sopranos, Not Face Away is dense and existential, and populated by quirky characters.  Characters that are sometimes too quirky to be believable, in fact.  But it shows off a lot of what Chase does right... dialogue, tone and a certain warmth.  It also showcases Chase's weaknesses, too, unfortunately.  Such as a tendency toward affectation, and no ability whatsoever to write an ending.

The story is highly autobiographical, apparently.  The main character is a rock musician in the 60's; a young man growing up with the usual daddy issues and angry-young-man politics and sexual preoccupation.  It's a coming of age story wherein the main character never really comes of age.  But he does gradually change his focus from rock music to film, as did Chase.  It's your call as to whether or not he found a medium better suited to his abilities.

Chase gets another strong performance out of James Gandolfini, the main character's dad, and a character who's complex and sympathetic and believable.  It is to Chase's credit that this character's medical issues are never played for obvious emotional ballast, nor are his motives laid out in a heart felt, come-to-Jesus conversation between the father and the son.  Gandolfini steals all of his scenes, sometimes just by quietly moving his eyes.  To hell with Robert Pattinson, nobody broods like James Gandolfini.

I'd be reluctant to recommend this movie to anyone other than hardcore fans of Gandolfini or David Chase.  There are some beautiful shots of a meticulously reconstructed late '60's urban New Jersey and New York, and there are a few scenes that are intersting in a quiet way. I'll give Chase kudos, too, for never making the main character particularly sympathetic. I think Chase might look back at his young self as a bit of a prick. I can relate, ad I liked that Chase never asked me to feel anything other than annoyance at his youthful indiscretions. The main character is preoccupied with Rod Serling and The Twilight Zone. That might explain his eventual work in TV, but gives no hint about his refusal to moralize.  And since he won't offer conclusions, there is not much in the way of character arc, and nothing much to talk about afterwards.  It's a well made, nice looking film that amounts to very little. To the extent that you think the same can be said about life, you might find more to like about Not Fade Away than I did.